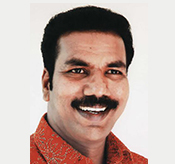 Shoby Thilakan is a dubbing artist and an actor. He mainly acts in Television serials. His presence is conspicuous in Asianet, SuryaTV, Kairali and Mazhavil Manorama. Shobi’s trump card, be it on the small screen or in films, has always been his distinctive voice. He got a big break, dubbing for Riyas Khan in ‘Balettan’. Shoby Thilakan won the state film award for dubbing for Sarath Kumar in ‘Pazhassi Raja’ in 2009.